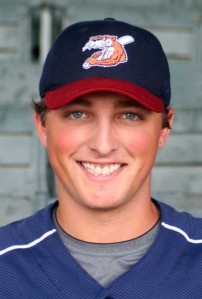 Former WKU right-handed pitcher Ben Paxton helped the Hilltoppers reach a NCAA regional appearance last spring, but his performance wasn’t enough to warrant an affiliated contract. Paxton caught on with Evansville of the independent Frontier League and dominated. He boasted a 0.23 ERA entering the last game of the season, but after allowing four runs his ERA “ballooned” to 1.12. Baseball America released its top ten prospect list in independent baseball Friday, and Paxton checked in at number four on the list.

BA writes: Paxton adopted a higher low three-quarters delivery at Evansville. The new release point allowed him to add some velocity (he touched some 92s) and helped give his slider some newfound bite that made him more effective against lefties. Paxton found that his stuff actually plays better in pro ball. His 88-89 mph fastball has a natural boring action that can break wooden bats on pitches that were jam-job singles against metal.

Here’s another nice profile of Paxton from the Evansville Courier & Press from August.