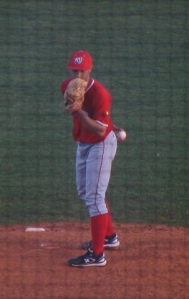 Inspired by College Baseball Daily‘s list of the top 100 college baseball players, BluGrass Baseball is counting down the top 25 returning Kentucky collegians in advance of the 2011 season. We continue the list today with a look at a 2010 midweek starter who will likely be counted on to carry his success to the weekend.

Hilltoppers’ redshirt senior right-handed starting pitcher Brian Edelen was 4-2 with a 3.78 ERA in 20 games, including 11 starts, for WKU in 2010. Edelen was the Hilltoppers primary midweek starter last season and also served as an important reliever during weekend series. In 52 and one-third innings pitched Edelen struck out 31 batters and walked 28. Opponents batted .278 against Edelen in 2010.

The Male High School alum sat out the 2009 season after transferring to WKU from Campbellsville University. In 10 games, including eight starts, for the New Market Rebels of the Valley League this summer, Edelen was 3-5 with a 7.53 ERA. The right-handed pitcher struck out 39 and walked 25 in 49 innings pitched during the summer season. Opponents batted .274 against him in Valley League play.